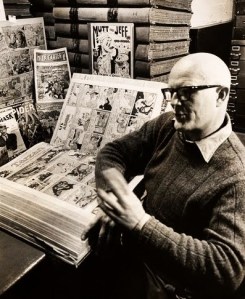 Postmodernism took hold early and hard in Northern California, even if some of its local practitioners rejected the label — Wayne Thibaud and Michel Foucault come to mind, the former chafing at categories in general, the latter preferring to make up ones for himself. Judith, my wife, subbed in the same art classroom where Mel Ramos once taught at Mira Loma High just outside Carmichael. Arguably Ralph Goings’ most reproduced work is of an Orange Julius-colored pickup parked in front of Town and Country Village just up the road from there.  (OK, maybe “Airstream” shows up more often.) Fred Knudsen, about whom I’ve written elsewhere, expanded the stylistic repertoire of mixed media by gluing Chinese language newspapers and kanji stencilled burlap rice bags onto canvases painted in hard geometric patterns ala Piet Mondrian.

The City in particular, being the gateway to and from the rest of the region, was awash in Postmodernism. It’s skyline had long been dominated by Coit Tower, whose alleged patterning on a fire hose nozzle would qualify it as a postmodernist precursor; and was by the time I moved there in the mid ’80s iconically represented by the Transamerica pyramid and I.M. Pei’s Cathedral of Perpetual Agitation. Revolutionary theatre pieces like Tony Pellegrino’s Deer Rose, in which the actors wore hybrid classical masks with tragedy on one side and comedy on the other and Hostess Sno Balls were pivotal props, were running in what looked like reclaimed industrial spaces. Thoroughly postmodern tales were woven by Armistead Maupin and Cyra McFadden in newspaper serials, an art form long dead everywhere else. Within days of my arrival, as I worked a shift endlessly looking up Pat Nathe’s thrift-store haul at Forever After Books at Haight and Ashbury in Books in Print, an angelic vision with the biggest brown eyes invited me to a service at the Church of St. John Coltrane, just down the hill and around the corner on Divisadero. Later, in my yuppie scum period, I worked for the registered agent for service of process of Anton Lavey’s the Church of Satan.

Nowhere is  this Postmodern bent more evident than in the prevalence of comics in the City’s culture.

Having worked at three used bookstores in San Francisco, including Aardvark Books, the best in the City — Up yours, Green Apple! — you’d think I had met scads of famous authors. Anne Rice is about it, at least as regards fiction. Jacob Needleman might be familiar if you’ve ever taken a comparative religion class. There were a few sci-fi and horror writers, too, but none of the biggies. They were in the orbit of the hauntingly lovely Brandy Mowe, a long-time Aardvark night-shift employee who drew them like flies, even the gay ones. But Aardvark was frequented by loads of comic book writers and artist, both “mainstream” and “underground.” There was Trina Robbins, creator of Vampirella, and Trina’s squeeze Steve Leialoha, who’s worked on Spider-Man, Spider-Woman, and  Howard the Duck, as well as played bass in Seduction of the Innocent with Bill Mumy and Miguel Ferrer. A regular was S. Clay Wilson, whose violent and quasi-pornographic work was an inspiration for R. Crumb. Aardvark’s cash register is decorated with Wilson’s darkly cutesy pictures of Henry, the ornery and corpulent store cat. And there was Bill Blackbeard, founder of the San Francisco Academy of Comic Art.

The death this last spring of Bill Blackbeard has come to my attention of late. I was reminded of Mr. Blackbeard last week when I took in a copy of The Smithsonian Collection of Newspaper Comics. The Smithsonian Collection was the first in a long list of compilations for which Mr. Blackbeard was wholely or partially responsible. He had been appalled by the practice that libraries have of destroying hard copies of newsprint when it is microfilmed or otherwise recorded, and in 1968 he did something about it. He founded that year the Academy as a nonprofit whose mission was the preservation of the comic strip as an art form. As I recall, when I worked at Aardvark he had recently completed the publication in book form of all the old Krazy Kat comics (Krazy Kat Komplete) and was hard at work collaborating on publishing the entirety of the Popeye newspaper run. This work brought him great admiration, but like most such callings it was not remunerative. His checks, though always eventually good, had a 50/50 shot at going through the first time. (John Hadreas, Aardvark’s owner, was both generous and understanding with regard to such matters when it came to regulars.) But he accomplished more in 30-odd years than most of us can ever hope for. When Ohio State acquired the collection in 1997, reports are that it took six semis to move it.